GGabriele Tosi is a modern pianist and composer of background piano music for film, videos and documentaries. Also is a piano teacher in Rome.

He graduated with honors in classical piano at the Conservatory of Pesaro, Italy and in Economics at the University of Rome "La Sapienza". He won several Italian piano competitions and he performed many piano concerts in Rome; he constantly improving the piano technique with several master classes.

He is an expert piano teacher and he worked with the most prestigious italian musical associations. He founded his piano school in Rome with an innovative system to study the piano for adult students and children.

Gabriele Tosi is also a composer of romantic piano music and a film music composer.

Gabriele Tosi's piano music is a perfect background music for many genres of films: Drama, Biography, Historic, Documantaries, Romance, Short and for tv. In his piano music there are a lot of different musical styles like romantic piano, epic music, ragtime, waltz, contemporary piano, relaxing piano.

YTIn 2017 his official YouTube channel reached almost 2.000.000 views and over 4.200 subscribers without music productions. Everyday a lot of people discover his instrumental piano music and immediately they love it.

Many independent filmmakers, but also famous artists and italian TV, made videos and short films with his royalty free piano music.

Gabriele Tosi is also on IMDb.

PPassion and perseverance are the keywords if you want to play the piano and to compose beautiful piano instrumental music. With this target Gabriele Tosi started to study the piano when he was child. Son of employees, Gabriele Tosi studied the piano at the Conservatory and at the same time Economy at the University of Rome.

He studied music theory with the great teacher Carmelo Piccolo of the Conservatory of Pesaro, and piano with several teachers like Clara Paladini, Piero Grazzini and Maria Teresa Carunchio. After these musical studies he graduated with honors in piano at the Conservatory Gioacchino Rossini and in Economy at the University of Rome. During the period 2001 - 2004 he won several italian piano competitions with his piano performance in Chopin, Debussy, J.S. Bach. Mozart, Gershwin.

MModern pianist, film music composer (and economist), Gabriele Tosi worked in several piano schools and in the electric company of Rome. After this experiences he founded a piano school in Rome and on the web "New Age Musica" with a lot of children and adult students. Gabriele Tosi's piano school wants to improve the artistic and technical skills of students with an new and fun way to learn the piano.

In 2010 he started an ambitious project of new piano compositions and he made his first CD "Andromeda". By chance he put his first piano song on a Youtube channel and in a few time a lot of people discovered it and the views increased quickly reaching over 1 million views.

Many listeners wrote him that his piano songs are wonderful relaxing piano music and help them to feel good. 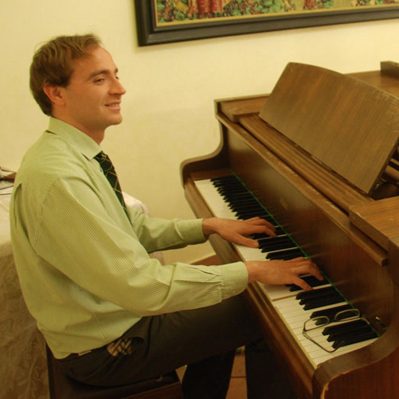 Discover his wonderful instrumental piano songs with powerful melodies on the most important digital sellers.

Background music by Gabriele Tosi for a free documentary